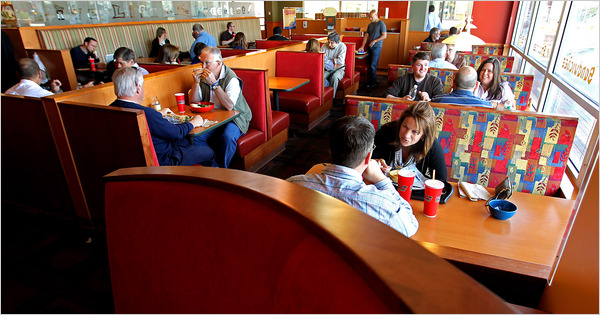 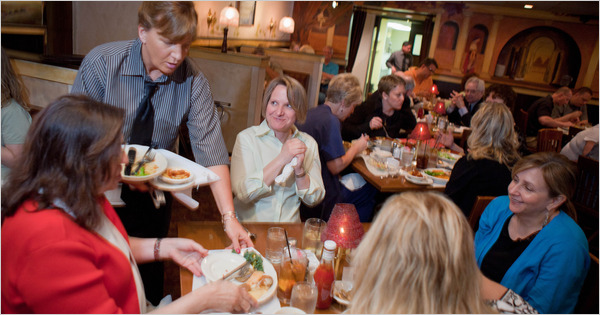 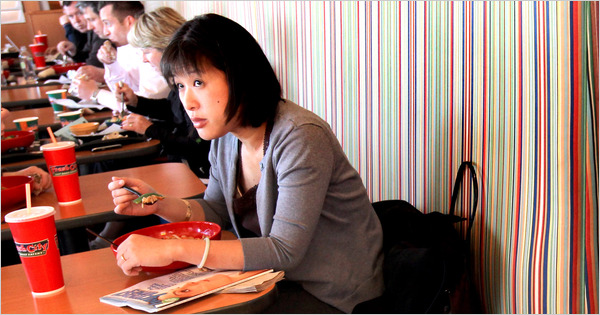 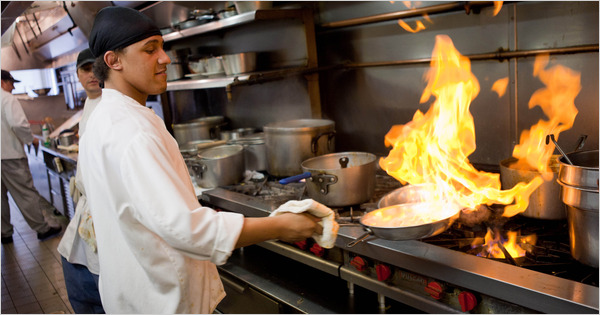 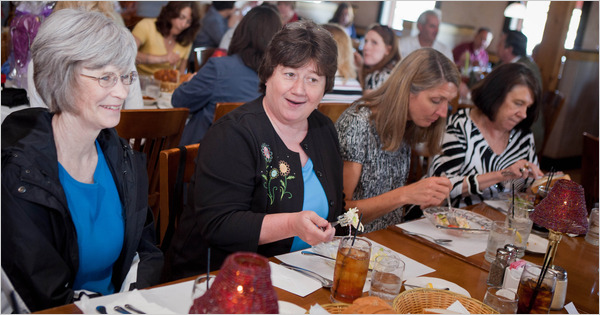 On many weeknights last year, in the depths of the recession, Tursi’s Latin King restaurant in Des Moines closed one of its three dining rooms and pared its kitchen to a skeleton crew.

Now, all three rooms are open on most nights, and the kitchen is busy again.

“These last couple of months are a lot better than they were last year,” said Robert James Tursi, whose family owns the restaurant, an upscale establishment that specializes in steaks and Italian food. Food sales were about 10 percent higher in February and March than they were during the same months a year ago, he said.

Restaurants all over the country are beginning to see signs of a potential recovery after a dismal 2009. Sales at some restaurants have risen in the last few months, and the industry has hired thousands of additional workers.

“There’s no question about this,” said Harry Balzer, chief industry analyst at the NPD Group, a market research firm that tracks sales at 47 restaurant chains with a total of 103,000 outlets. “There’s a recovery going on.”

Mr. Balzer said that March sales at restaurants open for at least a year were up 1 percent compared with March of last year. While that might not seem like much, it broke a string of 10 months of negative sales. He cautioned that while the sales trends were uneven across the industry, almost half the chains he tracks — mostly fast-food and family dining restaurants like Denny’s — had begun showing gains.

Still, many restaurant owners and executives said they expected the rebound to be slow and halting.

“Right now, we’re starting to see a few more people come in,” said Larry Reinstein, chief executive of Fresh City, a chain that sells sandwiches, salads, burritos and stir fry dishes at 18 outlets in the Northeast. But he quickly added, “The typical consumer is still cautious of what they’re spending.”

John S. Glass, an analyst with Morgan Stanley, said the uptick in restaurant sales paralleled recent gains in retail sales, which also had been hailed as a sign of returning consumer confidence.

“Going out to eat is an emotional decision, not a considered purchase,” Mr. Glass said. “It’s not like thinking about a new car or an appliance. It’s, ‘I feel better, let’s go out and treat ourselves.’ It’s probably a combination of the end of a long winter and the end of a long recession.”

And for the entire restaurant industry, the recession has been long indeed.

Total industry sales were down 2.9 percent last year in inflation-adjusted terms, according to Hudson Riehle, senior vice president for research at the National Restaurant Association. The year before they fell 1.2 percent. The association predicts a third year of decline this year, although the projected drop is just 0.1 percent. Mr. Riehle said that the industry had never before experienced even two consecutive years of real sales declines, making the current contraction unprecedented.

But now, restaurant owners are clearly feeling optimistic enough to do some hiring. In the first three months of 2010, the restaurant and food service industry added 42,500 jobs, adjusted for typical seasonal hiring patterns, according to the Bureau of Labor Statistics. Even so, Mr. Riehle noted that the industry still had 251,000 fewer jobs than it did in December 2007, when the recession began.

Several major restaurant companies will report first-quarter financial results this month, offering more insight into the health of the industry.

On Wednesday, Yum Brands, the parent company of Pizza Hut, KFC and Taco Bell, reported that sales at Pizza Hut rose 5 percent in the first three months of the year, compared with sales at the same stores a year ago, while same-store sales fell 2 percent at Taco Bell and 4 percent at KFC.

The increase in Pizza Hut sales was partly the result of a heavily marketed promotion offering any pizza for $10, the company said.

“We’re still in a challenging environment,” said Jonathan Blum, a Yum spokesman. But he said the results were an improvement over the last quarter of 2009, when sales fell 12 percent at Pizza Hut, 8 percent at KFC and 5 percent at Taco Bell.

“We’re trending in the right direction,” he said.

That would be welcome news to white-tablecloth chains like Ruth’s Chris Steak House. Although Ruth’s Chris has not yet reported its first-quarter financial results, the company reported a sales decline of 19.5 percent last year, on the heels of a 10 percent drop in 2008.

Mr. Knapp said he had also seen an encouraging trend in sales at casual dining restaurants, a category that includes chains like Applebee’s, Chili’s and T.G.I. Friday’s. Monthly sales are still below year-ago levels, he said, but the declines are moderating.

Among fast-food restaurants, Sonic was hit especially hard during the recession. The drive-in burger chain, known for its roller-skating car hops, said sales at its approximately 3,500 stores declined 13 percent from December through February, compared with the same period a year ago. The chain said the drop was partly caused by harsh winter weather, but the ailing economy also played a major role.

Buddy McClain, who owns 71 Sonic stores in the South, said that while sales were not growing, they had finally stopped falling in March at his Mississippi and Alabama outlets.

But in Florida, a state hit hard by the recession and the collapse of the real estate market, year-to-year sales comparisons have been negative for 17 consecutive months. In March, he said, sales at his Florida stores were 15 percent below the already reduced levels of a year ago.

“Everybody’s working harder and making less money, which is not what we call the American way,” said Mr. McClain, who has owned Sonic franchises for 32 years. “We’ve been through four so-called recessions since I’ve been in Sonic, and nothing has been near to this.”